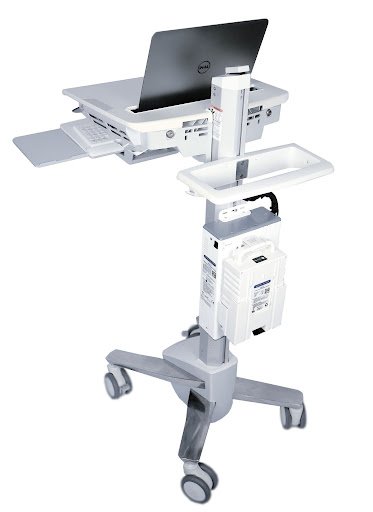 Using the right battery technology on your fleet of mobile computing carts is vital. Without reliable and long-lasting batteries, the computers and all other connected equipment on each cart may not last as long as needed.

At the same time, more capacity requires more material, increasing the powered cart’s weight. If your cart is too heavy, it may become unwieldy and inconvenient to use, reducing your caregivers’ efficiency.

Knowing how today’s battery-powered systems and technologies compare can help you determine which type is the best for you.

Although all three perform the same essential function of powering a medical cart, fundamental differences impact their effectiveness in medical and healthcare facilities. The three most critical aspects for workflow efficiency are capacity, charging rate, and weight.

Lead-acid batteries are among the oldest battery technologies known to humankind. The first lead-acid battery was invented in 1859 and has changed very little since. The most common example is the standard car battery, found in virtually every internal combustion engine vehicle.

Medical-grade lead-acid batteries for workstations on wheels somewhat resemble car batteries and possess similar characteristics. However, they are usually encased in special containers fitted with valve regulators, rendering these batteries resistant to leaking and making them safer to use than car batteries.

This battery technology is well-established, and one of its main advantages is the ease of production, resulting in lower costs. In addition, their battery capacity is on the higher end for a medical cart battery, averaging around eight to ten hours (depending on load and connected peripherals).

However, lead-acid batteries possess significant disadvantages rendering them obsolescent for use on mobile devices. The first and most obvious is weight; a typical 35-Ah SLA battery weighs up to 25 lbs. Higher-capacity 50-Ah models may reach over 30 lbs.

Another significant issue with lead-acid is how long it takes to recharge the battery: eight hours on average, approximately the same amount of time as the capacity. This issue is compounded by this technology’s inability to support hot-swapping on a mobile workstation, making it an inefficient choice.

Lithium-ion batteries employ much more modern technology than lead-acid, yet they have existed for a long enough period to be considered a proven and well-established choice. The most common examples of lithium-ion batteries found today are laptop and mobile phone batteries.

Lithium-ion power cells are much denser than lead-acid equivalents, allowing for smaller and lighter battery designs. In turn, Li-ion batteries designed for computer carts are significantly lighter (weighing about 6 lbs. on average), making the cart easier to handle and maneuver. In addition, Li-ion cells charge and discharge at much faster rates, allowing specific models designed for mobile workstations to charge to 100% in as little as four hours.

Another notable advantage of lithium-ion batteries is their ability to support hot-swap technology. Hot-swapping was first demonstrated in a Pennsylvania medical facility in 2001 using what was, at the time, state-of-the-art Li-ion batteries. It has since become an indispensable technology in medical computer carts.

Although lithium-ion provides many advantages, this battery technology is no longer the most advanced. Years of use in real-world environments have demonstrated its most significant drawback is limited maximum capacity.

On average, a single Li-ion battery will discharge in four hours. Some high-capacity models may reach five or six hours, but it remains too limited for the demanding work shifts of a healthcare facility. Even with hot-swap batteries, a single cart may require two or three fully charged batteries to last an entire shift. 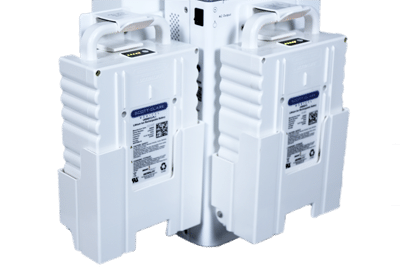 One of the newest battery technologies available today is Lithium-Iron-Phosphate (LiFePO4). The phosphate employed in the battery cells significantly improves the battery’s thermal and chemical stability over a standard Li-ion battery. In other words, such batteries are much safer than all other available technologies, as they are virtually unable to catch on fire or deform under high temperatures (as Li-ion is infamous for).

Although LiFePO4 batteries have not yet been miniaturized to the point of replacing lithium-ion in every application, they are sufficiently small and lightweight for use in medical computer carts.

However, safety is not the only advantage of LiFePO4 batteries. They possess high density and stability, granting them a high capacity and an excellent capacity-to-weight ratio, keeping the weight of a medical cart down.

For example, a Scott-Clark URB0012 battery weighs about 8 lbs. (slightly heavier than equivalent Li-ion models, much lighter than most SLA batteries) yet offers a maximum capacity of seven to nine hours, depending on load and peripheral devices connected.

In addition, the charging rate of these batteries is among the fastest in the world, resulting in rapid charge times: no more than three hours is required for a full 0% to 100% charge.

LiFePO4 batteries support hot-swapping, just like standard lithium-ion batteries. A dual-battery setup with hot-swap allows for a maximum combined battery life of eighteen hours, providing caregivers with more than enough time to swap a low battery with a charged one and keep the power flow uninterrupted.

Scott-Clark Medical offers a range of medical and laptop carts equipped with LiFePO4 batteries and proven FMCPT hot-swapping technology to help your caregiving personnel focus on their jobs. The less time spent worrying about batteries and charge level, the more energy they can commit to providing the quality care your patients deserve.