Replacing Anton Bauer batteries in the future, however, is easy. Scott-Clark Medical can substitute their high-quality, long-lasting, lithium ion battery for any facility that currently uses Anton Bauer.

The Anton Bauer company was formed in 1970 by an electrical engineer, George Bauer, and his old college roommate, Anton Wilson.

Anton, working as a cameraman for ABC at the time, knew all about the problems cameramen had with batteries. George had been a successful engineer. Together, they were among the first to develop smart chargers and digital batteries for cameras.

For several years Anton Bauer produced a separate line of batteries for medical carts. However, by the summer of 2019, the company decided to stop producing medical cart batterie, so many hospitals and other healthcare centers will need replacements for Anton Bauers.

Scott-Clark Medical has an excellent lithium battery to use in place of existing Anton Bauer power systems.

History of the Lithium Ion Battery?

The primary advantage of Lithium ion batteries is the ability to recharge.

American chemist Gilbert Lewis discovered the chemistry behind how lithium ion batteries work in the early part of the 20th century. However, the widespread use of rechargeable batteries did not occur until the 1990s.

Today, laptops, phones, and many other powered devices use this technology.

How Do Lithium Ion Batteries Work?

Regular batteries rely on a simple chemical reaction to function. Once both ends of the battery connect to the flashlight or another device, the chemicals in the battery begin to break apart.

The electrons travel through the circuit in the piece of equipment, providing electrical power. However, once the chemicals in the ordinary alkaline or zinc carbon batteries break down, the reaction cannot restart.

How Do Rechargeable Batteries Work?

Batteries today can do this hundreds of times before the chemicals, which slowly lose the ability to regenerate, fail.

Lithium ion rechargeable batteries have cells. Each has three components that generate power: a positive electrode, negative electrode, and an electrolyte.

The electrolyte, the type varies, is located between the electrodes. The positive electrode consists of lithium-cobalt or lithium iron phosphate. The negative electrode uses carbon or graphite.

When discharging or providing power, the lithium ions move through the electrolyte to the positive electrode, producing energy.

The opposite occurs when charging. Once all the ions stop moving, the battery stops working and needs recharging.

This is why it is better to keep a lithium battery plugged in when not in use since eventually, if left unplugged long enough, the battery will die.

Lithium batteries don’t have memory effect issues like the older rechargeable batteries, found in older cell phones, made from nickel-cadmium do. Lithium is also better for the environment than nickel-cadmium or other types of batteries.

How Can Scott-Clark Medical Batteries Help? 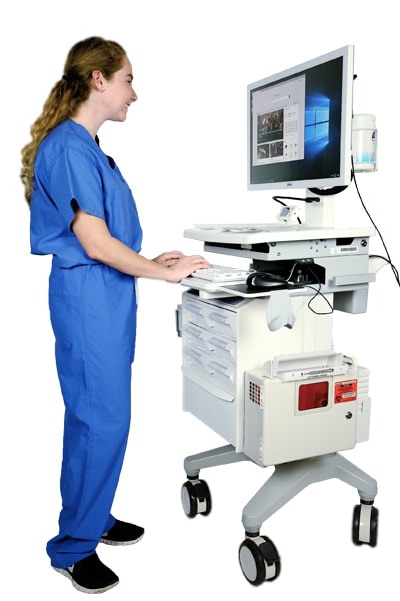 The FMCPT lasts longer than most lithium ion power sources. Easy to mount, a healthcare facility can retrofit existing carts to use the Scott-Clark Medical system.

The pack design permits users to quickly removal and exchange packs when necessary.

Call us today at 512-598-5466 or complete our online contact form to find out more about the Scott-Clark Medical power solution.